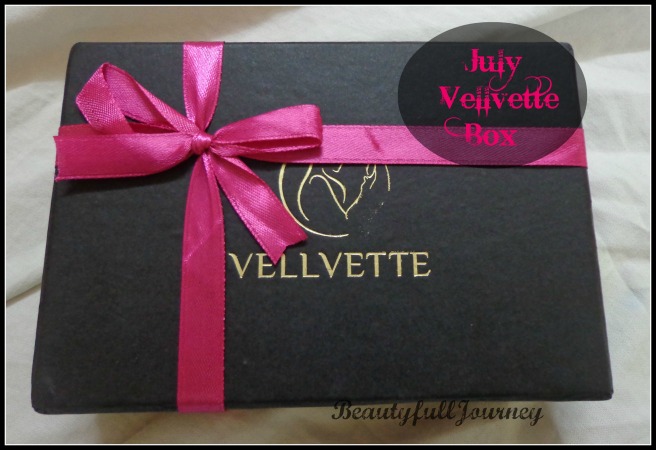 I had a busy day today and when I came home I saw this parcel for me and was quite surprised to see my July Vellvette box so early. I hadn’t even seen anyone else getting it yet!

END_OF_DOCUMENT_TOKEN_TO_BE_REPLACED

I got my Vellvette box bag quite late this time too, I just received it this morning.

Firstly, the delay in receiving it curbed my excitement a lot.

Plus, I had very high expectations from the box bag this time as I loved what others had got. But what I actually got didn’t really meet my expectations.

END_OF_DOCUMENT_TOKEN_TO_BE_REPLACED

I again got the box super late this month *sob sob* all my friends and fellow bloggers got it early last week and I’ve got it today.

I already knew what I would get by now after seeing everyone else’s contents. So it wasn’t a surprise at all. 😦

END_OF_DOCUMENT_TOKEN_TO_BE_REPLACED

So I’m back here with this month’s Vellvette box 🙂 I’m quite glad I’ve got it so early in the month this time, as promised by the Vellvette team last month!

In fact, it came so unexpectedly today, I didn’t even have time to get excited for it 😛

END_OF_DOCUMENT_TOKEN_TO_BE_REPLACED 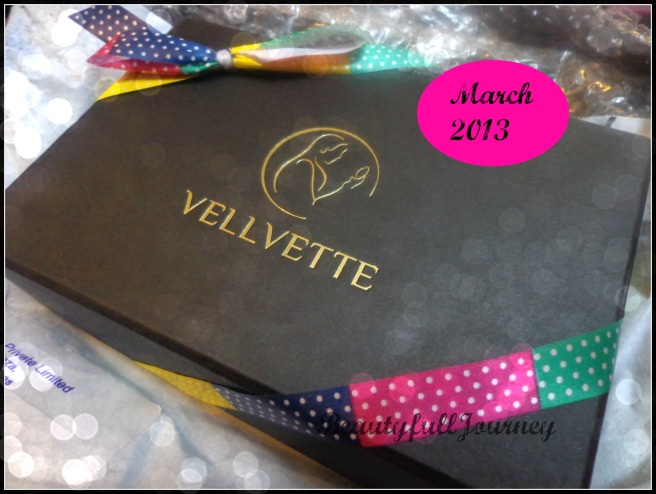 I know I’ve not been regular since some time, I was just lacking inspiration to post anything, if that makes any sense!

So, I’m back with the March Vellvette Box. I know I know, it’s April now but I just got my box today!

I had seen many other March boxes that fellow bloggers’ had got, and it was the first time that I wasn’t excited at all to receive mine. I say this because the stuff everyone was getting didn’t appeal to me at all! When Vellvette started their sampling program, they had such an amazing selection of products with L’occitane, Crabtree & Evelyn, FE, Clinique, BBW, VS, Clarins etc. The brands they’ve got this time(Remy Laure, Meiji) are so unknown to me that they don’t look like luxury products even if they may be! Plus the similarity of products in all boxes is another thing I dislike. At first it seemed okay when they had similar products in the Feb box as they wanted to keep up with the theme, but now it’s irritating. There are other subscriptions too getting popular nowadays like Enchantess which have improved their quality so much but I never subscribed to them as I used to think that Vellvette is the best and it’s quality would never degrade but now I’m thinking maybe I just said that too soon! I still have April’s box before I subscribe again so I have another chance for Vellvette to woo me all over again! Don’t break my trust guys, I love you a lot!!!

Another thing I am really disappointed with is how late they deliver the boxes now! I clearly remember in October I had got the box on 20th, so why is the delivery getting so late since the past few months! In January they had some confusion with my box n it was delivered to me on 2nd Feb and now I got a call from them on 1st April saying that I will get my box this week and I have to pay 1199… helloo!! I’ve already paid for 3 months in Feb! Again some confusion!

I’ve been one of their first customers and have been subscribing since September(their first month) without fail. I’ve also got 5 of my friends subscribe to Vellvette. I wrote quite a bashing mail to the Vellvette team on 30th March when I still hadn’t received my box, and I got a reply from Kaushik from the Vellvette team saying that they have been facing a lot of problems with the Delhi orders and are now starting an office in Delhi and from April, all problems would be resolved! They also mentioned that I’m one of their earliest customers which I was assuming they didn’t acknowledge but now I’m happy and really hope they get back to their former glory super soon 🙂

END_OF_DOCUMENT_TOKEN_TO_BE_REPLACED

So here is this month’s Vellvette box, I received just an hour back!

You must have seen the contents in other blogs, the contents are mostly same this time for all boxes. I wish Vellvette doesn’t make the stuff same in all boxes, it should be like it used to be in the initial boxes but despite this, this month’s box is lovely and all the products are simply awesome 🙂

END_OF_DOCUMENT_TOKEN_TO_BE_REPLACED

Lip Gloss juiced up with 8 hours of lasting shine. Spends every minute comforting lips. In 18 glistening shades from sheer to full intensity. Moisture makes each one even more mouth-watering. Protects lips, too.

I got this lip gloss duo as a part of my November Vellvette Box. Yes, I am on a Vellvette-Box-Products-reviewing spree. 😛 Many more are on their way 😛

END_OF_DOCUMENT_TOKEN_TO_BE_REPLACED

Don’t gain the calories but indulge in our range of finest Belgian Chocolate skin care products that are super rich in anti-oxidants. Nyassa’s Belgian Chocolate Sugar Scrub will leave your skin perfectly soft, smooth and radiant. Made from Belgian chocolate, Jojoba oil, cocoa butter and Shea butter, our scrubs not only have a gentle exfoliating action but also leave the body moisturised and youthful. Simply a must for that ever-lasting glow.

I have received this body scrub in my January Vellvette box. I mentioned in my post here that I really wanted this scrub when I saw so many people getting this scrub. The main reasons for wanting this scrub were – firstly I have never tried a chocolate scented bath product! And secondly, I wanted the cute tin box it came in 😛

The scrub retails for Rs.950/- for 200gm which I think is quite high a price for a scrub. But maybe it’s worth the price? Let’s find out!

END_OF_DOCUMENT_TOKEN_TO_BE_REPLACED

It’s been literally raining cats and dogs here in Delhi since last night! God how I hate rain! Ughh!!! But it’s got cool again and I like that since I loveeee winters 😀 so, I am sitting in my blanket with hot coffee! Aahh now that’s bliss 🙂

Anyway, I am talking about this perfume today which is my current favourite perfume! 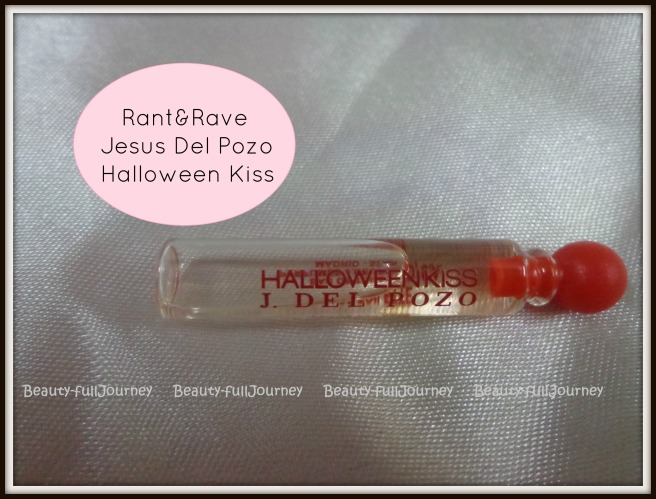 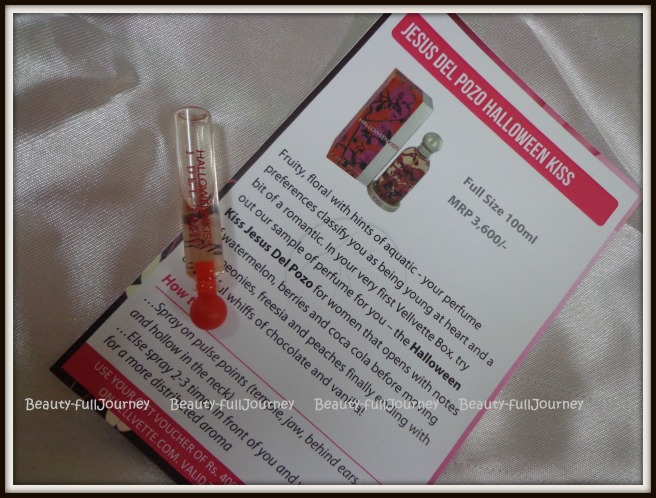 I got a sample of this scent in my first Vellvete Box in September 2012. The fragrance is amazing 🙂

END_OF_DOCUMENT_TOKEN_TO_BE_REPLACED

No, I am not late in posting this. Yes, I actually got my box today! 😦

Vellvette had some confusion and they mistook my order to have been completed last month. Hence the delay!

Anyway, I finally have my January box! And I’m showing you what I got in it.

END_OF_DOCUMENT_TOKEN_TO_BE_REPLACED

Love and light ✨💕 p.c. @saxena.arpit88
Just a regular girl amidst the crowd and city’s sparkling lights ✨
Another first 💕 #guccigang
Lucky me or lucky him 😉👻 #yolo #yobo #anniversaryspecial
My first 💕 I used to be the girl who said ‘I’ll never get my hair colored’. And I got my hair this pretty balayage this week. I was the girl who used to say ‘I’ll never get a tattoo’. And I already have 2 tattoos. In 28 years of my life, biggest lesson I’ve learnt is ‘ Never say never’ ❌ Swipe for a Before-After. . . . #yolo #anniversaryspecial #neversaynever #nobleachthough #saynotochemicals #staysafe #balayage
When half the world is freezing away, I can still wear dresses out and that deserves a post. 👗 ❄️ #floridaliving #sadist 🤣 #altardstate #lovefordresses #floral #datenight #mirrorselfie